Assam Don Bosco University had its fifth Convocation on September 10, 2016.  Degrees were conferred on 648 students, of which 172 students received the degree of Bachelor of Technology, 31 Master of Technology, 54 Master of Social Work, 23 Master of Computer Applications, 37 Master of Business Administration, 10 MA in Psychological Counseling, 9 MA in Human Rights, 11 MA in Mass Communication, 11 MA in Education and 16 students received M Sc in Physics. 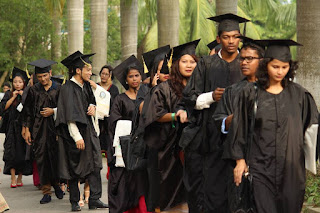 A total of 267 students from around 37 countries graduated in various disciplines through Don Bosco Global centre of Online and Distance Education. Doctoral degrees were conferred to 7 scholars. Students also received degrees for the campus programmes belong to different states of the country – 231 from Assam, 72 from Meghalaya, 15 from Manipur, 14 from Nagaland, 13 from Arunachal Pradesh, 5 from Tripura, 5 from Mizoram, 10 from Kerala, 5 from West Bengal, 4 from Chhattisgarh, 2 from Delhi and 1 each from Jharkhand, Bihar and Orissa. Also one student each from Maldives and Myanmar received Masters Degree in Education during the convocation.

Gold Medals under various categories were awarded to 13 outstanding graduates with the highest Cumulative Grade Point Average in each program. The Chancellor’s medal was awarded for outstanding performance during Post Graduation to Kangkana Barman of the department of social work. The Vice Chancellor’s medal has been awarded for outstanding performance during Graduation to Ankita Patowary of the department of Civil Engineering, for their notable and exceptional contributions to campus life.
The Hon’ble Chief Minister, Sarbananda Sonowal, was the Chief Guest at the occasion. In his speech, he said, ‘That day was a great day for Assam Don Bosco University. The outstanding performers of the university have been felicitated and honoured, which is a great inspiration to all. In the field of skill development, I believe Assam Don Bosco University can play a big role in the near future.’
Read more
Older Posts
Home

MBA blog on other platforms